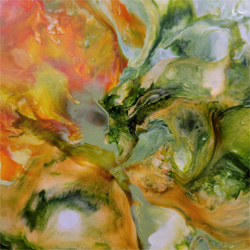 When I work with encaustics, I paint with beeswax, a torch, razors, my fingers, and often – as I light another flame – pure adrenaline.

There’s always an interesting call and response dynamic between what the fire and wax chooses to do and what was my original intention for the piece. So, rarely do I approach a piece with a preconceived endpoint in mind. To me, art-making is a creative practice of exploration – of finding the yet-hidden pieces of the story I’m about to tell. My private vocabulary of marks, scratches, and gouges give voice to my story.

I think of each finished piece of art as a short story: small in size, but telling a complete narrative.  I hope that when you view my pieces that you’ll find a connection to them.

I encourage you to create stories of your own. 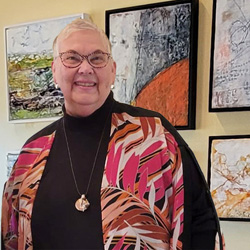 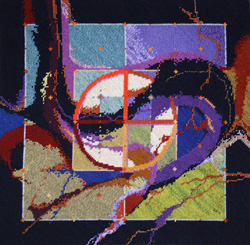 Connie grew up in Bucks County, Pennsylvania and comes from generations of accomplished artists. She moved to Chelsea, Michigan in 2015 and took the job of Executive Director of the Chelsea Area Historical Museum where she designed the museum’s five exhibit rooms. She is still active as a volunteer at the museum.

Since her early teens she was most content when she had a piece of fabric and a needle in her hands. Over her lifetime she has created hundreds of one-of-a-kind abstract needlepoint designs which have drawn critical acclaim and have provided her with the foundation for artistic explorations in other mediums.

While still in high school Connie’s passion for art and her eye for design were evident. Her teacher, the well-known artist George Douris, kept encouraging her and assisted her in assembling a portfolio of work that would get her accepted as a student into the Philadelphia College of Art. Fortunately she quickly realized that the academic world did not fit with her idea of how she was best suited to learn.

At the age of 18 she set out to explore the world of art with Irving Stone’s novel, “The Agony and the Ecstasy: A Biographical Novel of Michelangelo” in one hand, and tickets to sail to Europe on her own in the other. Her goal was to personally view and study as many sculptures and masterpieces as she could that were mentioned in Stone’s biographical novel. During her trip to Europe she traveled 11 countries, learned another language, visited the world’s most famous museums, viewed the art of the masters, learned about self-sufficiency, and celebrated her 19th birthday.

For over 50 years Connie Pickering Stover has been a graphic designer, web designer/developer and entrepreneur. She is now retired from her careers and, as a self-taught artist, has finally found the time and space to pursue her life-long passion for creating encaustic art in her own Ann Arbor, Michigan studios.

She has one son, Aaron Kellner, whose amazing geometric sculptures have been collected by patrons all over the world.